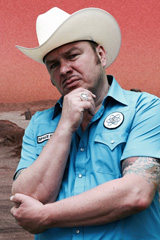 (*1965 in San Esteban, Tamaulipas, México)
25 years ago, tequila smuggling was still a profitable line of work. Since then international gangs have taken over the business of transporting not only this but other harder drugs. The risk of being caught either by the law or the competition has become incalculable, thus Stefans' decision to swap the smugglers mule for the squeeze-box couldn't have been made at a better time. Although also tough, the competition for the throne of the accordion king hasn't claimed any lives yet. 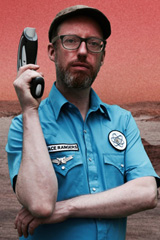 (*1972 in San Bernardo, Chihuahua, Méx.)
Raised on the isolated Hacienda El Quinto Coño, Bernd was already repairing alambradas, castrating novillos, killing coyotes and breaking cimarrones as a young child. When a stab wound received in a duelo a espada confined him to his bed for several weeks the boredom made him practice complicated cross rhythms on his batería. With these newly acquired skills, his music has won the corazones of the people. 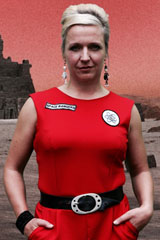 (*1970 in Santa Lucía, Texas)
After years spent as cowgirl, rodeo queen, lasso artist and all Texas bullriding champion, Lucía has taken up a less dangerous but equally painful occupation: singing country and western. Unlike many other artists in her field she's familiar with the brutality of the cattle business, which gives her work its profound quality. 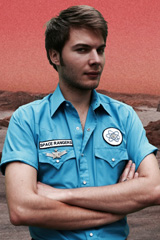 (*1989 in San José, Sonora, México)
Despite his youth Joscha has already developed a considerable reputation in the cantinas and bars of his hometown. His talent with dice and cards have brought him more than the occasional problem, such as waiting on the other side of the Río Grande until the situation at home has calmed down. These days he uses his quick fingers for playing the electric guitar and poker is forbidden backstage.